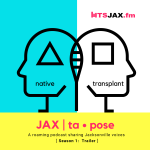 “JAXTAPOSE” is a MTS Original show launching on MTSJAX.fm. Each season publishes 12 weekly episodes. Interviews are recorded during two popup studios, sponsored by Mix Theory Studios, at different Jacksonville locations.  This popup-style interview invites residents to provide their opinion and personal stories about living in Jacksonville.  The episodes focus on the aspects of Jacksonville inspired by these stories. Episodes will highlight the city’s history, interesting statistics about the community, and its development opportunities.

Over the past few years, migration to Jacksonville has increased.  This growth has affected the area in many ways from rising residential pricing to increasing the talent pool. Transplants are seeking everything from Southern lifestyles and beaches to new friends and family. Jacksonville is also redeveloping downtown areas to attract more business and grow the city.  These ideas are the premise behind the first season of “JAXTAPOSE,” where we ask several people if they were a native or a transplant to this Bold City of the South.